Blyton Park sprint was a long sprint being 2 laps of the outer circuit. (Making just under 3 miles per run!).One of the other nice things was the Classic Marques, Mini-Cross and Aston Martin clubs being present resulting in a very interesting set of cars! What was also nice was the lack of Saxos! 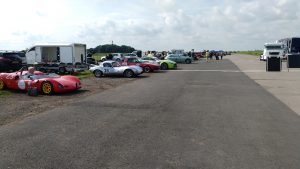 Having walked the course I did not think it would be to complicated.. a lot of decisions about which gear, and some parts looking a bit complicated to see the route as the course crossed over itself! As a result of this I elected to be slightly conservative on the first run. Deciding on the safer option of 2nd through The Ump, and The Wiggler. Also a big slow for Bunga Bunga. 186.1 seconds….

Some slight concern due to the stinking brakes and smoking brake as I came in, I checked this over and reached the conclusion that hopefully it was just a bit of dirt from changing the brakes.

This time leave it in 3rd for The Wiggler (second time through), and carry more speed through Bishops, and a big slide through Bunga Bunga due to not getting in tight enough on the first lap. The nice thing about doing 2 laps is that I could experiment and try higher gears and see if it felt better. 180.99 seconds.. could I get below 180?

The brakes did not smoke this time, so I presumed they had settled nicely.

Right leave it in 3rd for The Ump, which feels really weird as it is hard to see the gap in the barrier! Along with letting it run even wider through Bishops, what was interesting was flicking into the re-join of the track under heavy braking and wondering what the bang was from the back! Turns out that the rears where rather light and the ABS kicked in as they came back down and chasing the speed up Lancaster really seemed to help. 178.66 seconds under the 180 and still with some space and the ability to give a bit more abuse!

Some thought about a different line through Bunga Bunga, and the decision that if I seem to be going to hit the cone and time penalty on the inside I could floor it and use the understeer washout to miss the cone. This resulted in being in 4th through Port Froid, with a the ensuing extra speed, which the Panda moaned about but accepted! Resulting in a rather pleasing 176.88, and some thought that if another run could occur that I could possibly gain get below the 175 mark with even more aggression through Bunga Bunga and Port Froid. Brakes all fine this time, and now definitely bedded in and working great! 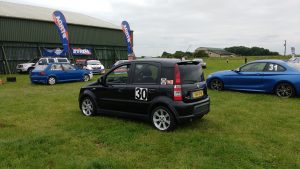 Sadly there was no time for the 3rd timed run due to the amount of excursions and people getting the lap count wrong!