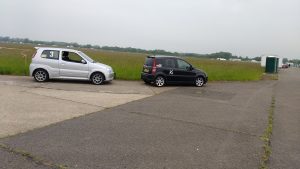 I have to say it seemed better pulling away. As for the brakes took me all day to try to work out how good they are!

Abingdon is a big day, with 2 courses and 4 runs on each course! 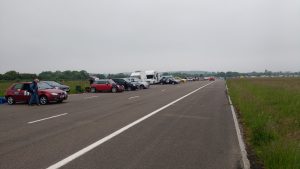 An interesing course.. basically blast as fast as you dare.. slam on the brakes mid corner, swing right, then try to balance going left over the finish.

Second Practice run 60.96 – much better but completely sideways through the final corner.

First proper run 61.58, confused wasn’t sideways over the finish and had a faster speed.. oh yes that would be the gear I missed when running up through the box.

Second run 61.07 slightly confused as I thought I had gone faster than second practice.. but as a plus point beat a Saxo (finally).

Time for some lunch then:

This is a give it large then almost stop for the twisty bits.

Decision made attack it harder…

Practice 1 69.12 – broke about 100 yards to early. And thanks for the person for making the comment.. if the ABS doesn’t click in you aren’t hitting it hard enough/

Run 1 66.51 much better braking about right and a bit of a flick going on in the last bend as a trial.

Run 2 65.06 – damm missed the sub 65 by so little. ABS kicked in harder this time but definately slow round one of the bends due to the front end washing out, and very sideway by choice through the last 2 bends as that seemed better.

Beat several Saxo and a 106 so a happy bunny.

The interesting thing is that the gap has shrunk and I am now infront of some of the Saxos!

Brakes have now had a fluid change and feel better on the road..