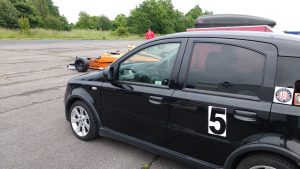 Another new track – no surprise.

First challenge is to get into Carver Barracks which actually was OK, just need to remember to have your pass ready before you turn into the premises.

Nothing changed for this event on the car which makes a change.

Having been unsure about which gear for many of the chicanes the mental decision was made to go slower rather than faster, and even after walking the course and a convoy run to try to get used to the cone blindness at some of the points. The interesting discovery was that the different surfaces have completely different adhesion and there are some big holes to avoid. 89.84 seconds

With a wait just before this run for the recovery of some of the cars that had issues, followed by the removal of some trespassers on the army barracks…

Big braver through the chicanes and also later on the braking. 86.09 seconds

Another wait whilst yet more trespassers where removed… trying to remove from my head how on earth people can be allowed to walk into the barracks I started my first timed run.

Much later on the brakes…. and then a brake snatched on the gravelly bit and the front end understeer made the cones come a bit close, so discretion being the better part of valour (or having to drive home and use the car for work), an ease off the brakes, through the gap in the cones, and return to the route. This then meant I tried to harder and faster at the chicanes which did work well as my time was faster even with the off than the previous run. 90.35 seconds Including the 5 second penalty)

Decision made, brake later for the roundabout, throw the car through the fast chicanes a bit more, ignoring the body roll, trying to just miss the cones. Went well.. apart from clipping a cone, thankfully no damage so another timed run with a 5 second penalty… grrr! 80.44 (which became a 85.44)

Hmm the challenge now.. could I get below 80 seconds or do I use a bit of space on the chicanes to avoid hitting a cone again. Well I went safe… 80.44 clearly I made a bit more time on some of the other bits, and wasn’t as far from the cones through the chicane as it felt.